Fundraising for Startups: Just Raise Once? 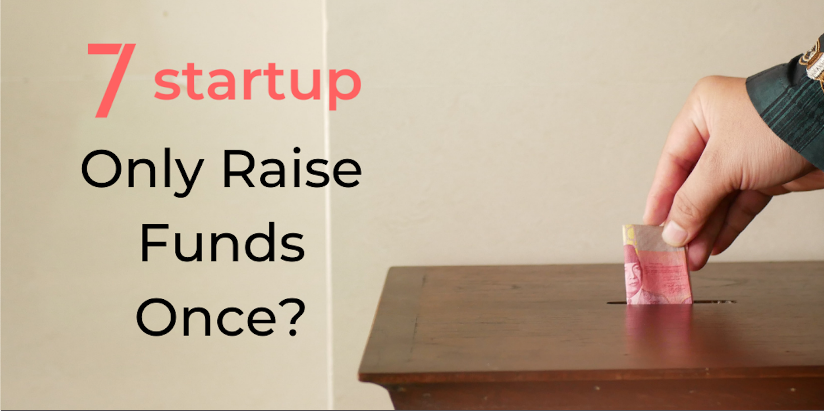 Wade Foster, the creator of Zapier, states, “fundraising for startups is a tool to get you where you need to go.” He’s seen too many businesses get so caught up in the rush to fill their coffers that they solicit money against their own interests or intuition. When this happens, he usually blames one (or both) of two archetypal players:

Inexperienced founders are often eager to obtain any advice they can on their next steps when faced with the scary prospect of actually developing a company. Because many startups’ first advisors come from the realm of fundraising, they’re inclined to offer counsel from that perspective. However, traditional venture capitalists have a playbook that they follow across their portfolio firms, and their business model works for them.

Generally, a VCs purpose is to make strategic investments in a small number of startups. Founders, on the other hand, aren’t in charge of a portfolio. VCs make decisions based on the outlook of their firm. For founders, advice is important and should be welcomed, but consider the experiences and reasons that may lie behind the advice.

Great founders must be able to sell a captivating vision – a skill that will come in handy when fundraising for startups as you try to court investors, employees, and customers to invest in unlikely new ideas. Some entrepreneurs, on the other hand, may be a touch too persuasive at selling their ideas. “It allows them to persuade others to give them money for a project that isn’t working out.”

They’ve been at it for a few years, and it’s evident that the unit economics aren’t quite working out. They go out to raise money again, but this time because they’re so adept at communicating that vision or promise of their future. They get more money than they deserve based on the company’s performance thus far. As a result, they continue to limp for another 12 to 18 months.”

3. Your Way or The Highway

The most important thing is to make sure “my way” isn’t just the “default method” you’ve grown to expect. “So, when you’re gathering your pros and cons at forks in the road, pay attention to who’s sharing theirs. Finding a representation of the ‘cons’ in circumstances like fundraising might take time,” Foster explains.

“As much as you feel comfortable within your circle, consider moving to the peripheral — outside your industry, postcode, and stable of advisors — to explain the principles of the decision to someone who won’t just regurgitate established points and counterpoints.”

Fundraising for Startups: Save Money Like It’s For Someone Else

The greatest approach to keep all of your choices open — and to make funding decisions based on strategy rather than desperation — is to run your business as effectively as possible. According to Foster’s experience, there are three significant areas where founders may be overspending.

Understanding your company’s operational demands and requirements will help you determine what you need to be productive. If this isn’t office space, then work from home!

Zapier, despite its notoriety, still lacks office space. And it’s not because of the remote staff that they’ve been successful. Much of the company’s success, according to Foster, is due to the efficiency that this strategy has brought about. “When a lot of early-stage companies come out of YC, the first thing they do is raise money, hire employees, and obtain an office space,” he explains. “We never had to worry about how much space we could afford or whether it would be enough to accommodate our expected growth rates.”

Of course, that isn’t a viable option for all — or even most — businesses. In any case, founders should consider how their infrastructure is assisting or hindering them, as well as where it could be reduced to enable leaner operations. Do you believe you’ll need a large conference room to meet with clients? It’s possible that a coffee shop will suffice.

Building a remote team, on the other hand, still necessitates time and careful culture development. Establishing a culture strong enough to unite a company’s dispersed employees becomes increasingly crucial. Zapier has had success with methods such as introducing a buddy concept, in which employees (including founders) are matched up weekly for a video chat. A coffee date in the virtual world.

Occasionally, two people will strike up a conversation about an idea that will result in a new app or product feature. However, buddy conversations are mostly about people connecting. Just because you’re working from home doesn’t mean you can’t have some of the same camaraderie you’d find in an office.

Take care when selecting a hybrid local/distributed workforce, regardless of your setup. “Completing the divide is the most challenging scenario because you now have two civilisations.” You’ve got your in-office culture and a number of freelancers that are not connected to the office environment.

Zapier’s decision to engage in a distributed workforce isn’t cheap; making it function properly necessitates paying for all those Airbnbs, retreats, and travel expenses, among other things. This may not be a viable option for every business.

Instead of ineffective sales tactics, some businesses find that using a dev platform or integrating their startup into a community where they can tap into clients is the ideal way to sell. Although not every product lends itself to a developer platform, every product can benefit from developing for an active community of current and potential users. Join communities that already exist in some fashion and be a valuable member of those communities.

If you’re creating a recruiting app, for instance, make an effort to connect with folks who are currently sharing recruiting best practices. Try to get into those regions that will bring clients to your inbound funnel so you don’t have to spend all day making sales calls.

Foster’s company, in reality, has never had a sales team. Rather than wasting time and money acquiring customers, they may focus on serving them. “We’ve worked very hard to make the UX as simple as possible, so users can self-serve, for example. We knew we had to keep the pricing point low because we wanted to assist small businesses.”

Zapier is nearly entirely reliant on its clients. “The only thing that matters is that our consumers are happy.” That is the target audience for our problem-solving efforts. We don’t have to worry about stuff like investors or stakeholders. “We have a few,” Foster says, “but not so many that it’s deafening.”

Another crucial skill of the lean startup is determining when you need to hire – and when you don’t. Zapier leans heavily upon automating whatever it can, which is somewhat unsurprising for a company focused on making workflows more efficient.

I have always appreciated the value of “don’t be a robot, make a robot” for a long time.

Only part of the equation is streamlining your processes. Even after you’ve automated everything you can, hiring will still be necessary to grow a firm. Foster encourages fellow founders to make smart decisions in this area as well. It can easily add a lot to a nascent company’s bottom line if used too extensively.

When it comes to reducing your personnel numbers to the smallest possible level, you have two options. You can hire for one of two reasons. One, you’re overloaded in some way and won’t be able to solve the problem otherwise. This is most common in demand-driven domains like support. Two, we’re looking to invest in products but don’t have the resources to pursue all of our options.

The idea is for hiring needs to become so clear that there’s no choice but to address them, aided by weekly one-on-ones and a culture of open communication.

Fundraising For Startups: Spend Like It’s Your Own Money

Taking personal ownership of your startup entails having a thorough awareness of your financial flow and making personal decisions regarding that money. Silicon Valley’s (relatively) open chequebooks may be a mixed blessing in this regard..

‘All right, where is the money going to come from?’ you must consider. Wade Foster and his cofounders Bryan Helmig and Mike Knoop, for example, worked on the project at night and on weekends for months, coming home from work and putting in long hours. “It required us to be very disciplined in how we handled the business. We knew how much money we had – and how much we didn’t.”

They didn’t have the luxury of aiming for perfection; instead, they had to get things done as quickly as possible. “Having done it for so long has shown us that it is possible.” We’ve got this. It’s a little ridiculous, but not spending a lot of money isn’t impossible.”

When fundraising for startups, keep in mind that credibility is also a form of cash. In that light, if you do decide to raise, it may not be necessary to raise a large sum. Perhaps you’d like to recruit one or two people or conduct some marketing tests. Just a smidgeon of ‘kick’ can get things moving in the right direction.

In some markets, credibility and partnerships are more important than money. It’s a method to gain someone’s seal of approval, to say, ‘This company is worth paying attention to.’

Raise a Company, Not Just Another Round

There are several early decisions that make bootstrapping viable for businesses, but you’ll need to think about major milestones differently, beginning with fundraising. This isn’t the kind of ‘disruption’ that most people think of when they think of entrepreneurship, but it should be.” explains Wade.

Being frugal with funds and running a lean operation does not imply creating a Dickensian workplace. On the contrary, it’s about allowing yourself the freedom to try new things — and maintaining the discipline to do so — in order to not only enable, but also retain the ability to have more options in the future. When fundraising for startups, only raising once isn’t right for every business model, but it’s a possibility that many people overlook. To see if it’s a possibility, look for information outside of the mutually reinforcing entrepreneur and investor stereotypes. Spend money like it’s your own and save money like it’s for someone else if you raise money. To avoid hunger pangs, limit early startup spending on fixed assets, employees, and client development.

You May Also Enjoy – What Are Term Sheets For Startups & VCs?