First movers: How Speed Can Damage Your Startup 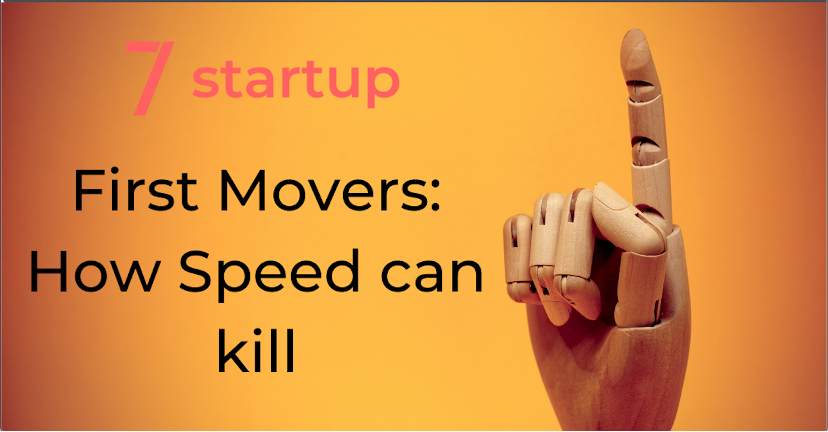 We’re surrounded by an overwhelming desire to move rapidly. It’s all about the speed. In business, and for startups first movers advantage can put you in a powerful position to fend off any new players in the market.

However, to achieve the first mover advantage, everything is done Fast. The pace is hectic, the atmosphere is hostile, and speed can be the difference between success and failure, or being first or second to market.

The concept of being first to market is known as first mover advantage, the idea is that if you can get a new concept out ahead of the competition, you can establish a brand and a following while everyone else is sleeping at the wheel. When competitors enter the picture, you’ll have a significant head start and be the market leader for years.

Examples of Moving Too Fast

But what about the firm that was first to market and one of the fastest to move from investment to launching their product? What happened to Pebble? Despite being the darling of the crowdfunding industry when it secured $20.3 million on Kickstarter in 2015, the firm only sold for $23 million to Fitbit in 2016 when it found itself unable to continue operating due to a lack of finance and a series of strategic mistakes (one of which was massively underinvesting in marketing).

At Google, the entire Android team was focused on speed and time to market when Nexus 7 was launched, Android’s initial entry into the tablet market. They moved from concept to debut in less than 6 months, which was unprecedented in the hardware industry. Andy Rubin, Android’s founder, and mercurial leader was so focused on bringing a device to market that they went from concept to launch in less than 6 months. Where are the Nexus tablets today, despite the fact that we were first to market with an incredibly competitive product?

They completely underestimated demand because they released so quickly. They moved so quickly that they didn’t have enough customer service personnel to handle the influx of complaints from individuals who hadn’t received the devices they’d paid for. Customers came to the Mountain View campus in person to express their dissatisfaction with how late their devices were delivered.

One of the major issues is speed. There is far too much speed.

Don’t get me wrong: I’m not anti-speed, and I understand why it’s one of the most important components in helping startups succeed. But I’ve seen and made plenty of mistakes when speed was a major factor.

Why Can Moving Too Quickly Harm Us So Much?

Credibility is diminished every time a leader makes a mistake, especially when it could have been avoided if more people had bought in. The more trust is destroyed, the more it is jeopardised.

When people lose faith in you, it’s nearly impossible to mobilise them behind your cause. It’s like the story of the “boy who cried wolf.” People simply lose hope. The game is over.

We don’t tell employees everything they need to know when we move too quickly. People may not appreciate the urgency behind why we’re doing what we’re doing if they don’t have enough context.

They may not know who is doing what, when it is due, or what their job is if they don’t have enough information. Their perspective on the matter may differ from ours.

We don’t enlist others as part of the solution when we don’t spend enough time speaking and registering them. We tell people to do something without taking the time to understand their reasons, desires, or requirements.

When people aren’t registered, they aren’t as invested in the project’s individual success. Their opinions aren’t heard or considered. They don’t feel like they own the project, and when things become bad, they’re more inclined to believe it wasn’t “theirs” in the first place.

People are less motivated when they don’t feel like they own something or have a stake in the outcome. They haven’t really committed. We’re simply putting additional work on their plates or asking them to work nights and weekends.

They are less driven since they feel compelled to do so. Importantly, when their motivation diminishes, it quickly impacts those around them, making them feel as if they aren’t contributing or losing drive themselves.

People who are not motivated do not provide the best solutions to challenges. They don’t go the additional mile or stretch themselves. They are unable to think beyond the box and develop creative ideas that could save time, money, and effort.

Ineffective solutions lead to half-measures or patches that must be corrected later. This may aggravate the situation.

When we make a lot of mistakes and miss deadlines, stress and irritation set in, and the blame game starts. If people start seeking someone to blame, you run the risk of creating a poisonous workplace.

When you have a toxic workplace, things slow down even more, and individuals begin to wonder why they are still there.

When GetJar launched in 2010, they constructed a big portion of the platform from the ground up. “We had grown too quickly and had made a number of glaring scalability blunders. We spent at least a year revamping our systems when we should have been focusing on other market changes.”

That blunder, along with the $40 million in venture capital funding, finally killed the company.

People may not physically leave your organisation or firm, but they may emotionally leave. These employees were never fully informed about why you needed to move so quickly, they never consented to your insane timetables, and they saw the mistakes that they predicted would occur.

As a result, when mistakes occur, they throw their hands up in despair. When this happens frequently enough, individuals begin to look for ways out.